I read my first book in Japanese 🎉

Last year, I embarked on a journey to learn Japanese. I set myself an objective to read Harry Potter and the Philosopher’s Stone (or ハリ ー・ポッターと賢者の石) by the end of 2020. Two weeks ago, I accomplished this goal. In this post, I describe my journey so far, approach to reading, and will present some fun stats and graphs I recorded along the way.

Back in April, I suddenly found myself with a lot more time on my hands. The UK was under strict lockdown. Not having to commute to work, socialise, or even go outside at all, meant I gained several hours a day. At first, I spent all that extra time playing Animal Crossing (200 hours within the first month of its release). On my third attempt to landscape my Animal Crossing island, I stopped. I was wasting an opportunity. If there was any time to reignite my interest in learning Japanese, this was it.

My previous attempts to study the language were largely unsuccessful. I dabbled a bit with language learning apps and lost interest quite quickly. Even though I am fortunate enough to understand a fair amount of Japanese already (thanks, mum), I just didn’t have much experience or confidence in being able to acquire a new language. My time learning French and German at school taught me that I could rote-learn vocabulary lists, memorise a script by heart and get decent exam results. But I didn’t retain any of that information a month later let alone years after I left school. The lesson I took away from it all was that I just wasn’t suited to languages. Plus, I didn’t find it very interesting either.

Nevertheless, I was committed to give learning Japanese a proper go. It felt like I would be foresaking my heritage if I didn’t.

So, my self-directed language learning journey began with learning how to learn. I quickly realised, though it should have been obvious before, that picking up a second language isn’t anything special. Most sources say that over half of the world’s population is multilingual. Clearly, I didn’t need to be gifted or attuned to languages. I just needed time, dedication, and effective learning methods.

I also discovered that it isn’t generally recommended to learn a language in the way I was taught at school. Rote-learning vocabulary lists and studying textbooks only get you so far. At some point you need to confront what you’ve learned in the real world. This can transform the vague, tenuous connections you have between foreign sounds and meaning in your native language into something concrete and meaningful in its own right. It’s that extra step between knowing that the bunch of lines 青 can mean “green” or “blue” and having the correct colour wash over you, without thought, when seeing that character in context. For that, you need to immerse yourself in the language and be exposed to the vast variety of ways each kanji, word, grammar point, etc. can be used.

At the start of April, I set my focus on improving my reading ability. Doing so would unlock a whole world of material to immerse myself in. But I was starting from pretty much square one. Japanese has three writing systems - hiragana, katakana and kanji. The first two I knew well enough at the time, there are only 46 characters in each. Kanji, on the other hand, is a whole other beast and has thousands of characters with multiple ways to read and understand each of them. I was familiar with about 20 kanji at the time. The average Japanese adult can read over 3000.

So, knowing that I wanted to get better at reading, I just needed a direction to work towards. This goal of reading Harry Potter became my lighthouse and gave purpose to all the other studies I was undertaking.

Of course, I didn’t just spend the past 8 months slowly working through the book. Before I could even get started on the first page, I spent half a year buried in textbooks, reading short form text such as NHK Easy News articles, and reviewing kanji and vocab using spaced repetition techiques. In future, I might write another post going over the resources and methods I used in more detail. But for now, I’ll focus on how I tackled reading my first book in Japanese. 📖

Learning a new language unlocks a whole new world of rich content to explore. It’s the reason a lot of people study a new language in the first place. So, you might be wondering why I chose a book that’s originally written in English. A story I’m already very familiar with and wouldn’t be getting much out of by reading it again in its impure, translated form.

Discovering a new narrative wasn’t the reason I chose Harry Potter. I simply wanted to get better at Japanese. And it’s much easier to get started with something that you are already familiar with.

For starters, you have a lot of context to full back on. I might come across the phrase 組み分け帽子 and upon checking the dictionary, would discover that the first part (組み分け) means “division into groups” and the second (帽子) means “hat”. Without any knowledge of Harry Potter, this is quite a cryptic phrase and could leave you scratching your head for a while. For those of us that know the story, it’s easy to recognise “Oh, it’s the Sorting Hat!” This meant I had no trouble with made-up names and phrases (which there are a lot of in Harry Potter). These nuggets of knowledge also acted as anchors in the story that would help me verify if I was understanding the text correctly.

Likewise, I don’t have a great tolerance for ambiguity. I like to make sure I’m understanding every sentence, every detail when I’m taking something in. This sense of unease, that I’m missing something, is hard to overcome if you’re reading in a language you’re not confident in. Better to start with a tale you already know.

As an aside, I also got my hands on a beautiful illustrated version of the book which has charming depictions of the magical world on every other page. This, again, helped set the scene and gave me clues to how the story was developing.

I decided I would track my progress during my time reading Harry Potter. Things I wanted to track included how many kanji and words I was looking up as well as how long it was taking me to read each page. I knew I would be slow, much much slower than if I was reading in English so I needed a way to keep motivated. Having visibility over my improvement over time became that motivator. Knowing that, even if I’m going at a snail’s pace reading this children’s book, I am at least a lot faster than when I started out.

How would I track these stats? Whenever I sat down to read Harry Potter, I used a stopwatch to record how long I was reading for. I also had a spreadsheet where I would enter each word or kanji I looked up. After each reading session, I would fill in the number of pages I read, the length of time, and the number of lookups.

It was all fairly manual. At some point I would like to build an app that automates a lot of this for me. But this might just sit atop my list of projects that I never actually start. 🙈

How long it took me

As you can see, it took me a long time to read Harry Potter and the Philosopher’s Stone. To put it into perspective, I could have read over ten English novels in that time. But I expected that going into this journey. What I was more concerned about was whether I became a better reader over those 62 hours. And the answer was a definitive yes. 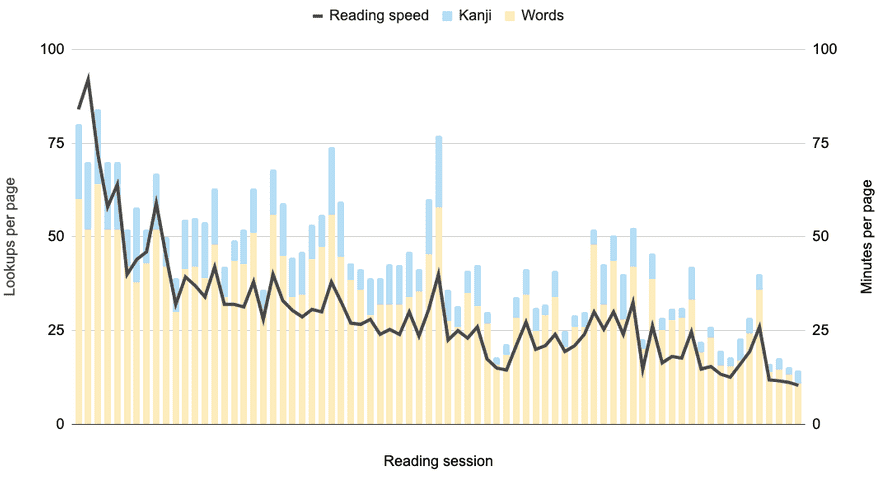 The first page took me an hour and a half to read. But I improved quickly and dramatically. My average reading speed reduced to 51 minutes per page by the end of the first chapter. In the final chapter, I was reading at a pace of 11 minutes a page. 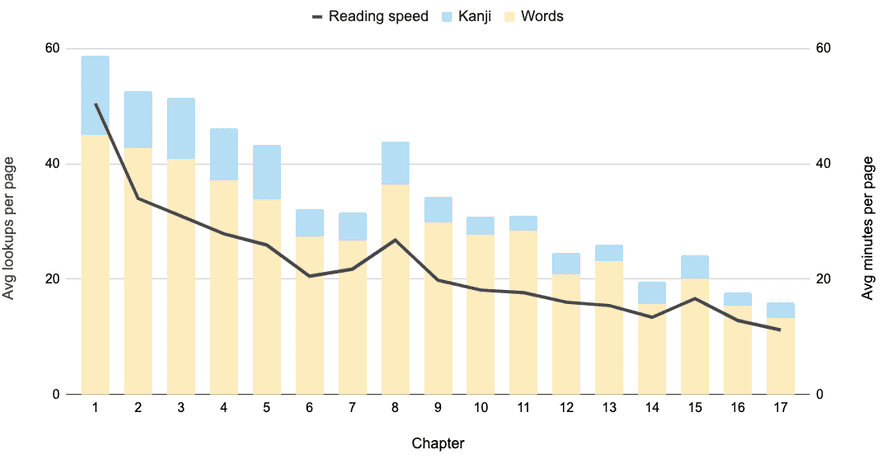 The rate of lookups tells a similar story. The first chapter had me looking up an average of 45 words and 14 kanji per page. Whereas, in the final chapter, I only needed to look up 13 words and 3 kanji per page. The decreased rate of lookups wasn’t the only reason my reading speed was increasing either. I was also getting better at distinguishing individual words within a sentence and acclimatising myself to the grammar.

One thing I hadn’t predicted was my stamina growth. I started off only being able to read half a page at a time. Despite being very motivated (it was what the previous six months were leading up to after all), I found it draining enough that I needed to take a break after 30-40 minutes. By chapter ten, I could read whole chapters in a single sitting, spending almost three hours doing so.

And yet, progress wasn’t always linear. I clearly had some setbacks. Notably, in chapter eight, we spend a lot of time with the infamous Severus Snape. His style of speech was a lot harder to decipher than the other characters, not least because of his liberal use of obscure kanji.

This was an important lesson I learned. From chapter to chapter, page to page, even sentence to sentence, the difficulty of the text you’re reading is going to fluctuate. And yet, it’s easy to lose sight of that in the moment. You might read a difficult text and think you’re not making any headway. But if you take a step back to view your journey over a wider time frame, it’s easy to see that you really are making progress. Tracking my stats helped me to gain that perspective. I could recognise that chapter eight was just a bump in the road (or spike in the graph) in my quest to get better.

Overall, I am pretty pleased with the progress I made. Not all of it is going to translate to the next book I read (I’ll be surprised if I come across as many breeds of owls any time soon). But there should be some knowledge that carries over - common words and kanji, familiarity with grammar, and perhaps most importantly, the confidence that no matter how painful a book is to start with, I can make significant strides if I stick with it. This year, my goal is to read two Japanese books a month! I will continue tracking my reading stats and hope to report back once I’ve read more.